Today marks the Anniversary of the Birth of Maharani Gayatri Devi of Jaipur, who was born on this day in 1919! The Cooch Behar Princess who married the dashing Maharaja of Jaipur, becoming the glamorous Maharani who won the world’s largest landslide election victory and was later jailed by the Indian Government ‘playing badminton with the prostitutes & murderesses’, Maharani Gayatri Devi possessed a spectacular jewellery collection, which included this Cartier Emerald Suite!

A spectacular Art Deco Suite composed of a Necklace and a pair of earrings in diamonds and platinum, set with Mughal cabochon emeralds inlaid with ruby and diamond flowers from the 18th-19th century, which were mounted by Cartier In London in the 1930s.

The Cartier Emerald Suite was probably acquired around the time Princess Gayatri Devi of Cooch Behar married Maharaja Sawai Man Singh II of Jaipur in 1940, as the Maharani wore the suite in a series of spectacular portraits taken at Rambagh Palace by Cecil Beaton, which earned her the title of one of Vogue’s Ten Most Beautiful Women. 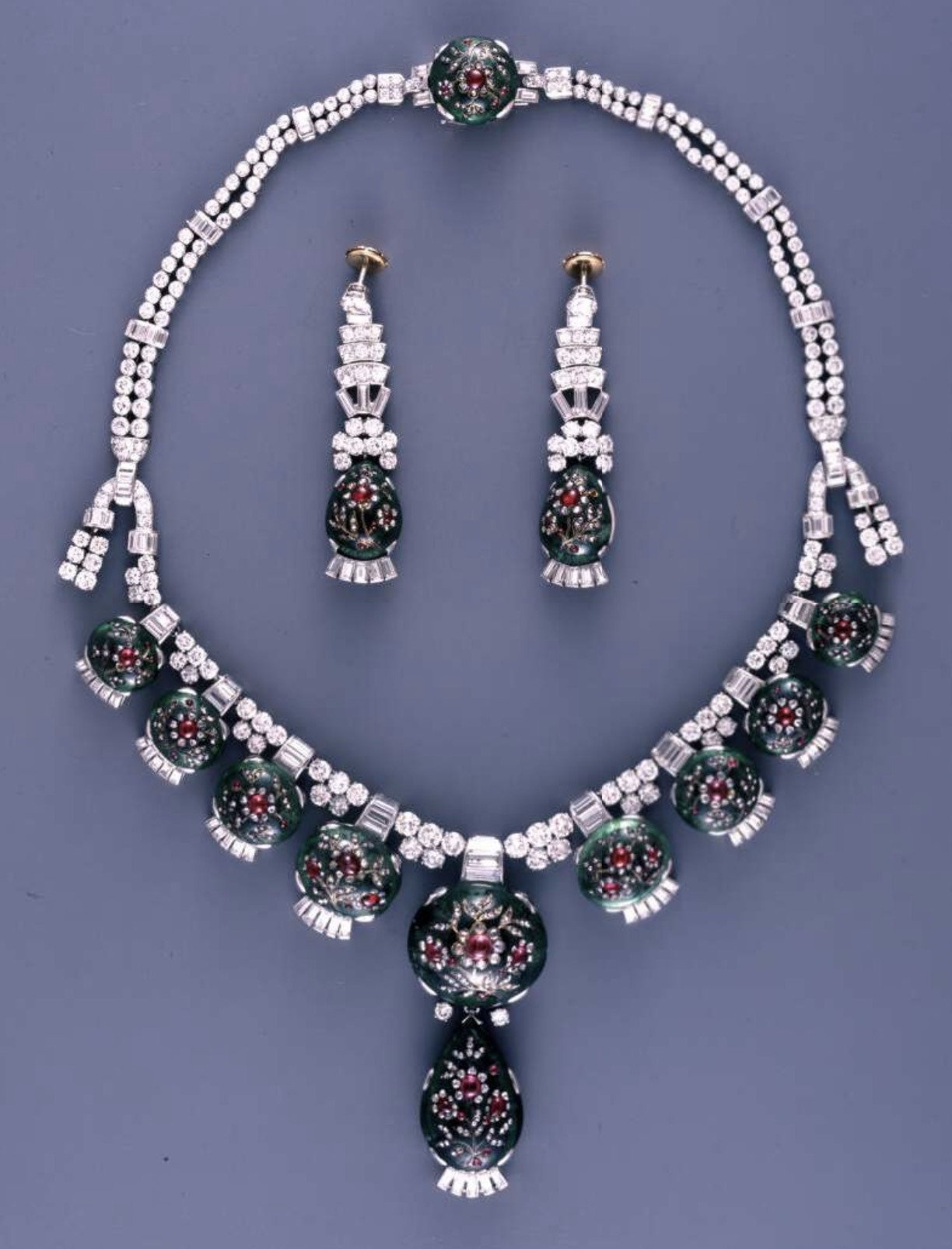 Disillusioned by the state of India and its government, especially after being jailed during the Emergency, the Maharani seems to gave anonymously donated some of her most prominent jewels to the British Museum around 2001, which included her Cartier Emerald Suite. These jewels are on display at (G47/dc14) and were also displayed at the “Cartier and Islamic Art: In Search of Modernity” Exhibition at the Musée des Arts Décoratifs in Paris from 21 October 2021 to 20 February 2022, though it is unknown if it will also be exhibited at the Dallas Museum of Art in Texas from 14 May 2022 to 18 September 2022. The curator’s notes state:

The cabochon emeralds inlaid with ruby and diamond flowers are Indian work of the 18th-19th century, set in the Western style with baton diamonds. They were probably intended for an Indian necklace in origin and have been re-used by Cartier to create a hybrid piece in the style of the 1930s.

Cartier themselves travelled widely in India, to seek commissions from Indian clients who wanted their jewels reset in platinum in the Western taste and to bring back quantities of Indian stones and pearls which were then mounted for Western clients. Fashionable and artistic society in London and Paris adopted the exotic Indian style. At the international exhibition held in Paris in 1925, Cartier’s showpieces were set with magnificent carved Mughal emeralds.