Last night, Queen Silvia of Sweden delivered a big surprise when she wore a pair of coordinating emerald earrings with the historic Bernadotte Emerald Parure, which had previously consisted of a necklace and two brooches. To mark the occasion, we are featuring the spectacular Emerald Parure, which is one of the most historic jewels int he massive Swedish Royal Collection. 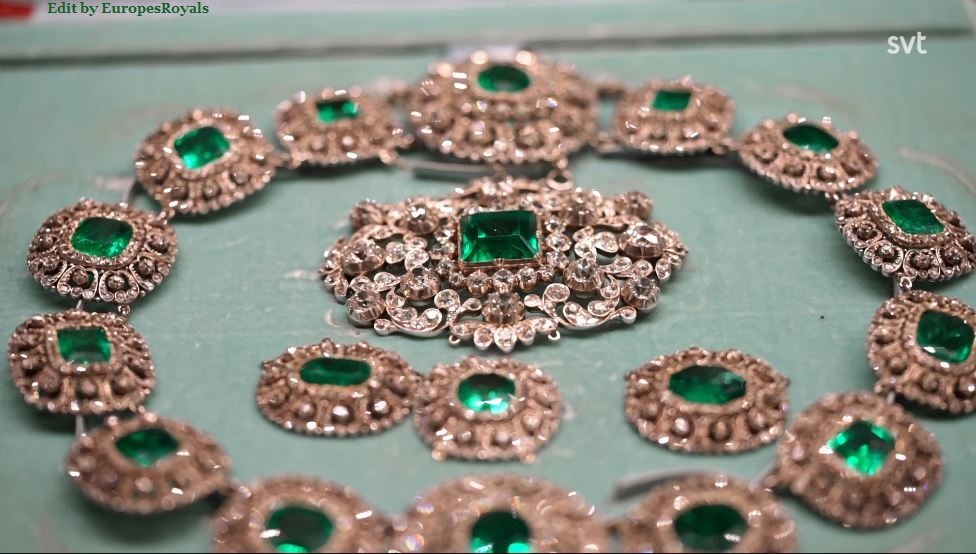 Originally a belt created for King Carl XIV Johan, the first Bernadotte King of Sweden, the stunning necklace was composed of sixteen (now fourteen) emerald and diamond medallions, with a large cluster brooch (the original belt buckle) and a smaller brooch. First recorded in the inventory of the Royal Collection in 1844, the belt was converted to be used as a necklace by Queen Sofia of Sweden around the 1880s.

However, it wasn’t until the 1950s that we got a photographic of the Bernadotte Emerald Parure in use, when it became a favourite of Princess Sibylla of Sweden, mother of King Carl XVI Gustaf, who often wore it with the Connaught Diamond Tiara for the Swedish Opening of Parliament and the Nobel Prize Ceremony.

Queen Silvia first wore the historic Emerald Parure with Queen Sofia’s 9-Prong Tiara on a State Visit to The Netherlands, her first, just a few months after her wedding, later notably wearing it at the Nobel Prize Ceremony in 1987, as well as with the Braganza Tiara for the Luxembourg State Visit in 1991 and a portrait created for her 50th Birthday in 1993.

The Bernadotte Emerald Parure was also worn by her sister-in-law, Princess Christina, most notably at the Ball of the Order of the Innocence in 1970, and a few years later, by her aunt, the newlywed Princess Lilian, at the Nobel Prize Ceremony in 1976, just a few weeks after Queen Silvia’s first appearance.

Queen Silvia has continued to wear the Emerald Parure for all manner of events, from State Banquets at home, like for the Italian State Visit in 1998, on State Visits abroad, an example being a Gala Performance during a State Visit to Denmark in 2007, and more personal events, like the 90th Birthday of Archduke Otto von Habsburg in 2002.

By the 2010s, the necklace of the Bernadotte Emerald Parure had been shortened, and it was in this new format that it was worn by Crown Princess Victoria at the Nobel Prize Ceremony in 2012. Later, the parure was worn at the Representationsmiddag in 2017 and the Italian State Banquet in 2018, all three times with either the Four-Button Tiara or the Six-Button Tiara, fitting as they were created from Buttons also belonging to King Carl XIV Johan.

In recent years, Queen Silvia notably wore the Bernadotte Emerald Parure at the Nobel Prize Ceremony in 2018, while the following year, it was extensively filmed for the ‘Kungliga Smycken’ Documentary, when we saw that two elements had been removed, which, we found out yesterday, have been created into a pair of earrings, as worn by Queen Silvia at the State Banquet for the President and First Lady of Germany last night. There is no doubt we will continue to see this spectacular historic Parure for years to come!