Happy Birthday to Queen Raja Zarith Sofiah of Johor, who turns 62 today! The accomplished Perak Princess who is the consort of the Sultan of Johor, Queen Zarith Sofiah has worn a plethora of jewels over the years, one of the most important of which is the Johor Diamond Tiara!

Featuring seven splendid diamond elements featuring bursting diamonds from a crescent on a diamond scroll base, honouring the design of the Johor State Flag, which features an Islamic crescent and a star. The provenance of the piece is unknown but it was likely created in the later half of the 19th century, by Benson’s in London (as discovered by the wonderful Beth).

The earliest image of the Tiara being worn were in the late 19th century, when it was worn by Sultanah Khadijah Khanum, the fourth wife of Sultan Abu Bakar, in an official portrait. Two of the diamond elements did not exist on that first version of the Tiara and were added in the mid 1930s.

At some point after Sultan Abu Bakar’s death in 1895, the Diamond Tiara was inherited by his son, Sultan Ibrahim of Johor, and worn all but one of his six wives; Ungku Maimunah Binti Ungku Abdul Majid, Che’ Ruqaiyah, Sultana Helen, and Sultana Marcella, notably at the Coronation of King George VI in 1937 and the Coronation of Queen Elizabeth II in 1953.

In 2015, the Diamond Tiara got a new wearer when Queen Zarith Sofiah wore the Tiara at the Banquet held after the Coronation of her husband. Sultan Ibrahim, as the Sultan of Johor. So far that appears to be the only instance when the Tiara was publicly worn by Queen Zarith Sofiah though there is no doubt this spectacular heirloom will be worn for years to come! 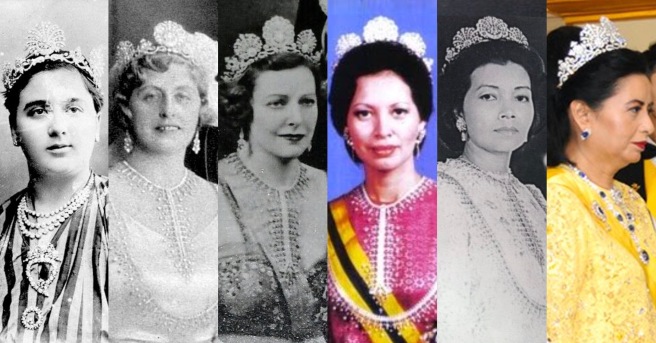