Happy Birthday to Princess Muna Al-Hussein of Jordan, who turns 79 today! Born Antoinette Avril Gardiner in Chelmondiston, Suffolk, the daughter of Walter Percy “Tony” Gardiner, a British Army officer who later became a military adviser in Jordan, and Doris Elizabeth (née Sutton), she attended Bourne School in Kuala Lumpur, Malaysia. She met King Hussein of Jordan, while working as a secretarial assistant on the film set of Lawrence of Arabia, which was shot in Jordan using the King’s troops as extras. The King married the now Muna Al Hussein, after her conversion to Islam, in 1961 and had four children, including the current King Abdullah II of Jordan, before their divorce in 1972, after which she was allowed to keep the style of Royal Highness and the title of Princess of Jordan. Princess Muna  has remained a valued member of the Jordanian Royal Family for decades, even to the other children of her former husband, like Princess Haya bint Al Hussein. She continues to work and live in Jordan, involved in the development of nursing in Jordan, which includes founding the Princess Muna College of Nursing and Allied Health Professions and the Princess Muna Scholarship Fund for Nursing. We wish HRH a very Happy Birthday and Many Happy Returns! 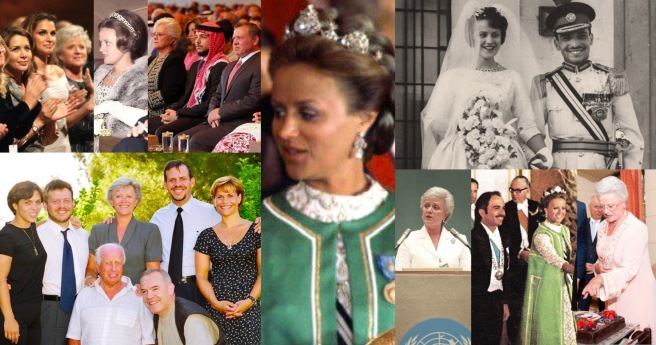 One thought on “Princess Muna of Jordan”