Happy Birthday to Princess Edouard de Lobkowicz (born Princess Marie-Françoise of Bourbon-Parma), who turned 89 yesterday. A French-Italian Princess by birth and a Czech-French Princess by marriage, Princess Edouard has attended glittering balls for almost 60 years. In honour of her birthday, we are featuring her Diamond Tiara.

#RoyalFlashback- Prince Xavier and Princess Madeleine of Bourbon-Parma host a Ball to celebrate the coming of age o… twitter.com/i/web/status/1…

The first (known) person to be pictured in the Tiara was Madeleine, Duchess of Parma (born Countess Madeleine de Bourbon-Busset), who wore the piece in a 1930s Portrait, the coming of age of her daughter, Princess Cécile, in 1955, and at the wedding ball of her daughter in 1960. Click HERE to learn more about the Bourbon Parma family. The Tiara is said to be a Bourbon-Parma Heirloom rather than a Bourbon-Busset jewel and the Duchess probably inherited it from her predecessor.

A Guide to Tiaras at the wedding ball of King Frederik and Queen Ingrid of Denmark royalwatcherblog.com/2017/05/24/wed… https://t.co/tLrPxqTiFs

The Duchess of Parma frequently loaned the Tiara to her sister-in-law, Prince René (born Princess Margaret of Denmark), who wore the piece in a portrait, at the 1935 wedding ball of Crown Prince (later King) Frederik of Denmark and Princess Ingrid of Sweden, and for King Christian X’s Silver Jubilee in 1937. Princess Margaret was the mother of Queen Anne of Romania.

In 1949, the Duchess of Parma loaned her Tiara to her niece Archduchess Elisabeth of Austria (daughter of Empress Zita of Austria) for her wedding to Prince Heinrich of Liechtenstein in Lignières. The Tiara was later worn by her own daughter, Princess Charlotte Maria of Liechtenstein, for her wedding in 1979. The Duchess of Parma also loaned the Tiara to her daughter, Princess Maria Teresa of Bourbon-Parma.

In 1960, Princess Marie-Françoise of Bourbon-Parma wore her mother’s tiara for her religious wedding to Prince Edouard de Lobkowicz at the Notre Dame de Paris. The Tiara was a wedding gift to the Princess (known after her marriage as Princess Edouard) from her mother, and was worn by her at quite a few society events afterwards, before being sold. Prince Edouard was an active member of the Sovereign Military Order of Malta, heavily involved with the Order’s work in Lebanon. Two of their four children died (quite tragically) young (click HERE to learn more) and he died in 2010. Their third son, Prince Charles Henri, is one of my oldest and most loyal Instagram followers. I wish Princess Edouard a very Happy Birthday and many Happy Returns!

To brighten this dull day in #NYC … A mid-19th Century diamond tiara, selling @sothebys in #Geneva on May 15, on view today and tomorrow in our New York galleries. #sothebysjewels #MagnificentJewels #tiara #NobleJewels

UPDATE- The Lobkowicz Tiara will be auctioned at the Sotheby’s Magnificent Jewels Sale in Geneva on May 15th, 2018.

UPDATE #2: The Tiara was bought by Prince Charles Henri and has returned to the family! 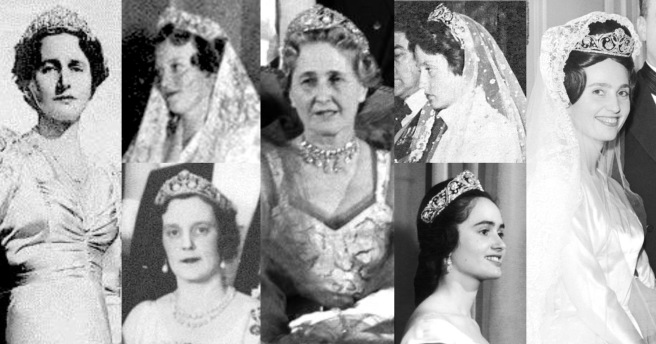