Today marks the 40th Anniversary of the Death of Princess Victoria Louise, Duchess of Brunswick, who died on this day in 1980. To mark the Anniversary of the passing of the Kaiser’s only daughter who married the Head of the House of Hanover and spent a long life at the centre of German Royal and Noble circles, we are featuring her trademark Brunswick Tiara.

An elaborate scrolling diadem with three large central diamonds in the and a laurel wreath border, the Tiara originates from Empress Josephine of France, making its way to Germany where in 1913, it was bought by the people of Brunswick and, after being extensively repaired by Court Jeweller Hermann Jürgens, given to Prince Ernst August of Hanover (later Duke of Brunswick) as a wedding gift for his bride, Princess Victoria Louise of Prussia, the only daughter of Kaiser Wilhelm II, in 1913. The Brunswick Tiara was just one of many wedding gifts, which included the Prussian Diamond Tiara from her parents, the Kaiser and Empress Augusta (now belonging to their granddaughter, Queen Sofia of Spain), a Diamond Necklace/Tiara from the groom, and an Emerald Laurel Wreath Tiara, another gift from her parents (which belongs to Archduchess Francesca von Habsburg). 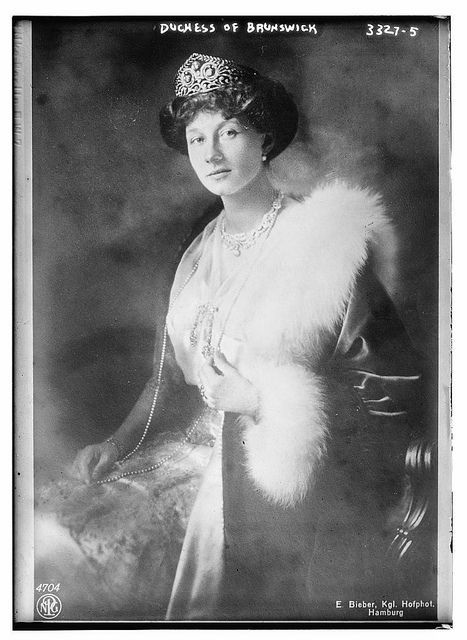 Princess Victoria Louise wore the Brunswick Tiara for her Wedding Portraits and her first Official Portirats as the Duchess of Brunswick and it remained a favourite during and after the couple’s short reign as the Sovereign Duke and Duchess of Brunswick, following which the Duchess wore the Tiara at royal events, including the Wedding of Prince Christian of Schaumburg-Lippe and Princess Feodora of Denmark in 1937, the Wedding of her daughter, Princess Frederica, to Crown Prince Paul of Greece in 1938, and later when the Royal Family moved into Marienburg Castle in Hanover after being forced to abandon Blankenburg Castle in Brunswick at the end of the Second World War, wearing the Tiara at the Wedding Ball of her son, Prince Ernest Augustus, and Princess Ortrud of Schleswig-Holstein-Sonderburg-Glücksburg in 1951.

By the time Princess Victoria Louise was widowed in 1953, the Prussian Diamond Tiara had been given to her daughter, Queen Frederica of Greece,, while the Emerald Laurel Wreath Tiara was given to her daughter-in-law, Princess Sophie of Greece and Hanover, and the Diamond Necklace Tiara was given to Princess Ortrud, but Princess Victoria Louise retained the Brunswick Tiara, her grandest Tiara, for herself. Remaining at the centre of German Royal and Noble circles for her entire life, the Duchess wore the Tiara at a variety of events, most notably the Wedding Ball of her grandson, King Constantine II of Greece, and Princess Anne Marie of Denmark in Athens in 1964.