Today marks the 145th Anniversary of the death of Queen Josefina of Sweden and Norway, who died on this day in 1876! A Leuchtenberg Princess and granddaughter of the famous Empress Josephine, Queen Josefina brought a massive amount of jewels to the Swedish, Danish, and Norwegian royal collections, among which was her splendid Cameo Parure!

Featuring seven splendid Napoleonic Cameos, the Tiara consists of seed pearls set in red gold, topped by the cameos. The Parure consists of a necklace, pair of earrings, bracelet, and brooch, with cameos encircled in Gold. The Cameos features intricately detailed scenes from Roman Mythology and upon closer inspection, the signatures of Giuseppe Girometti, Filippo Rega, and Vincenzo Catenacci were revealed carved on the cameo. The figure on the brooch is Napoleon Bonaparte.

The Cameo Parure was created in France and was given by Napoleon to Empress Joséphine around 1809, and it was eventually inherited by her granddaughter, Queen Josefina of Sweden and Norway, who was pictured wearing the tiara is a variety of Official Portraits througout her life. Queen Josefina bequeathed the Cameo Parure to her daughter, Princess Eugenie, who in turn left them to her nephew, Prince Eugen.

Prince Eugen was unmarried and he loaned the Cameo Parure to Crown Princess Margareta of Sweden for a Gala in 1916. In the early 1930s, her daughter, the future Queen Ingrid of Denmark, wore the Cameo Parure for a Gala event where she dressed as Queen Josefina.

In 1932, Prince Eugen gifted the Cameo Parure to Princess Sibylla of Saxe-Coburg and Gotha when she married Prince Gustav Adolf of Sweden, and she wore it for the first time at a Gala Performance in Stockholm soon after their Wedding. Princess Sibylla also wore the Parure at the Wedding of Prince Knud and Princess Caroline-Mathilde of Denmark in 1933, the Wedding Gala of Crown Prince Frederik of Denmark and Princess Ingrid of Sweden in 1935, and the Coronation of King George VI in 1937. Following the tragic death of Prince Gustaf Adolf in 1947, Princess Sibylla’s hair went white almost overnight and she refused to wear the Cameo Tiara and Parure, feeling it did not suit her white hair.

The next public appearance of the Cameo Tiara came in 1976, when it was worn by Silvia Sommerlath when she married King Carl XVI Gustaf of Sweden. Queen Silvia said:

The King asked if I wanted to use it at our wedding. That was his idea. It’s a beautiful Tiara and it was so nice to know that Princess Brigitta and Princess Desiree also used it. It was a good Omen that I could use it now. It became a wedding Tiara.“

#RoyalFlashback- A Banquet at the Palace of Versailles to celebrate King Carl XVI Gustaf and Queen Silvia of Sweden… twitter.com/i/web/status/1…

I used it for a German state visit. I wore a orange – red dress to align to the Cameo orange – red. When I wore a yellow dress, the cameras showed the Cameo in yellow.“

Another notable appearance of the Cameo Parure has been at the annual Nobel Prize Ceremonies, where it has become a refreshing alternative to the Leuchtenberg Sapphire Parure and Queen Sofia’s 9-Prong Tiara, also providing us many pictures and footage of the parure glittering in action.

In 2010, continuing the family tradition, the Cameo Tiara was worn by Crown Princess Victoria for her Wedding to Daniel Westling, and has worn parts of the parure to other events, including the Nobel Prize Ceremony in 2016. The Crown Princess said

I’ve only wore it once, at the wedding. It’s a very fragile Tiara. I have a little extra respect for it, it’s very beautiful. I also think about when my mother wore it at her wedding.

Nothing was easier that wishing that the CP would use it at her wedding. Not just because they got married at the same day, but also she would feel that it was a good Omen to wear it. But like all marriages, it’s very fragile.“

A post shared by Princess Madeleine of Sweden (@princess_madeleine_of_sweden)

I don’t like to travel with it. I used some of it during our last state visit to , because I wanted to tell a story. That this was a gift from Napoleon to Empress Josehine. The president was very surprised. It was wonderful to show the french people the close bond.“

The earrings and bracelet were worn by Princess Madeleine for the Christening of Princess Adrienne in 2018. Last year, the Swedish Royal Family talked extensively about the Cameo Parure in the ‘Kungliga Smycken’ Documentary, providing lots of stunning footage and information about the parure. There is no doubt we will continue to see it for years to come! 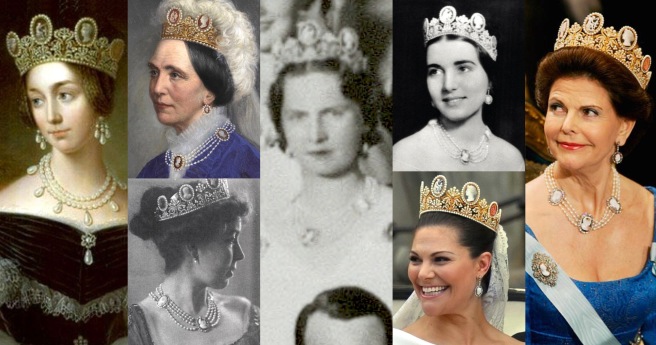 „Something that is very beautiful is the Cameo Tiara. It was fashionable to have cameos that told different stories… twitter.com/i/web/status/1…