Today marks the Anniversary of the Death of Princess Augusta of Cambridge, Grand Duchess of Mecklenburg-Strelitz, who died on this day in 1916. The elder daughter of Prince Adolphus, Duke of Cambridge and Princess Augusta of Hesse-Kassel, Princess Augusta was born in Hanover, where the Duke was the Viceroy for King George IV and King William IV, until they returned to London after the Accession of Queen Victoria, her first cousin, to the British Throne and the Accession of her uncle, the Duke of Cumberland to the Hanoverian Throne, in 1837, residing between Cambridge House in London and Cambridge Cottage at Kew. In 1843, Princess Augusta married Hereditary Grand Duke Frederick William of Mecklenburg-Strelitz, her maternal first cousin, and the couple had one surviving son, Grand Duke Adolphus Frederick, and succeeded to the Grand Duchy in 1860, reigning for 44 years. The Grand Duchess frequently visited her family in Britain, becoming particularly close to her niece, the future Queen Mary. Quite shrewd and intelligent, Princess Augusta was one of the few people who attended the Coronations of King William IV and Queen Victoria, providing a lot of details for the Coronation of King Edward VII in 1902, though old age prevented her from attending the Coronation of King George V in 1911. After the Grand Duke’s death in 1904, the Dowager Grand Duchess’ relationship with her son and daughter-in-law was strained, but the Accession of her grandson, Grand Duke Adolphus Frederick VI of Mecklenburg-Strelitz, in 1914 brought her much joy as he shared as pro-British views. Following the outbreak of World War I, the British Government suspended Princess Augusta’s annuity, which she had been receiving since 1850, and while isolated from her relatives in Britain, she was able to communicate with Queen Mary through Crown Princess Margareta of Sweden. The Dowager Grand Duchess passed away on this day in 1916, at the age of 94, the last surviving and longest-lived grandchild of King George III. 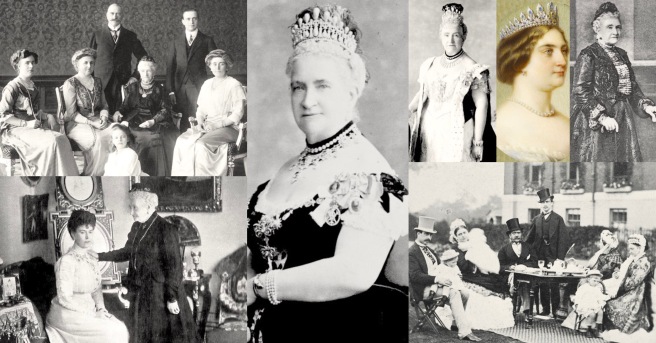 One thought on “Princess Augusta, Grand Duchess of Mecklenburg-Strelitz”