The Wedding of the Prince of Prussia, son of Prince Louis Ferdinand of Prussia and Countess Donata of Castell-Rüdenhausen and Head of the House of Hohenzollern, and Princess Sophie of Isenburg, daughter of the Prince of Isenburg and Countess Christine von Saurma-Jeltsch (wearing the Isenburg Tiara), at the Friedenskirche in Potsdam on this day in 2011, also commemorating of the 950th anniversary of the founding of the House of Hohenzollern. The Prince and new Princess of Prussia (in the Prussian Meander Tiara) hosted a magnificent Dinner and Ball that evening in the Orangery Palace at Sanssouci Park (which will be the subject of next year’s article to mark their 10th Anniversary). Following their Civil Wedding on the 25th, there was a Charity Concert at the Gendarmenmarkt Concert Hall in Berlin. 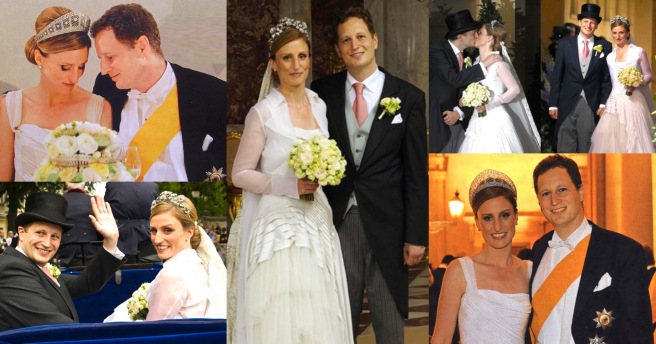 One thought on “Wedding of the Prince of Prussia and Princess Sophie of Isenburg, 2011”