Happy Birthday to Queen Jetsun Pema of Bhutan, who turns 30 today! The Queen Consort of the Himalayan Kingdom which is the happiest country in Asia, we’ve seen Queen Jetsun Pema in a variety of unique jewels, including today’s piece, the Bhutanese Turquoise Bandeau Tiara.

Featuring three round turquoise medallions in a gold and turquoise band, the Turquoise Bandeau Tiara was pictured on Princess Ashi Dechan Wangmo, who wore it for the Coronation of her brother, King Jigme Singye Wangchuck, in 1974.

After wearing two tiaras during her wedding celebrations, Queen Jetsun Pema wore the Turquoise Bandeau Tiara at Emperor Naruhito’s Enthronement Banquet last year, when it was paired with coordinating earrings and a pearl necklace. Lets hope we see this royal heirloom again soon! 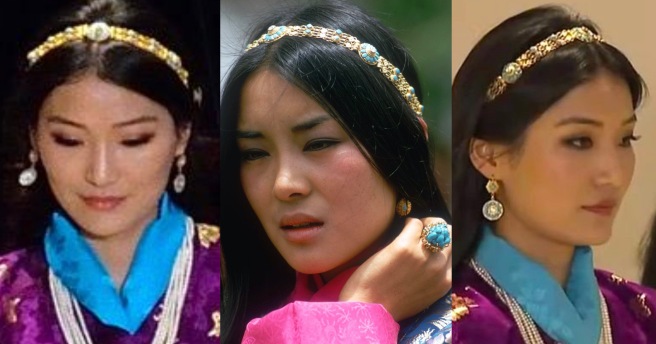