Happy Birthday to Lady Pamela Hicks, who turns 91 today! The younger daughter of Lord Mountbatten, first cousin of the Duke of Edinburgh and the Queen’s bridesmaid and lady-in-waiting, who married a influential interior designer, Lady Pamela has had a fascinating life, and after featuring the Hicks Tiara she reportedly still owns and the Mountbatten Tiara, which she doesn’t, today we are taking a look at another illustrious jewel no longer in her possession, the Mountbatten Art Deco Diamond Necklace-

An Art Deco Diamond Platinum Chain is thought to be a contemporary redesign of an earlier piece from her late mother by the then Lady Louis Mountbatten, a wealthy Heiress, in the 1920s and 1930s. The longer Chain can be divided up into a shorter necklace and two bracelets.

The Art Deco Diamond Necklace was worn by Lady Mountbatten most notably in a series of official portraits taken to mark her husband’s appointment as the last Viceroy of India, after which he was made Earl Mountbatten of Burma, and was often worn as a necklace with the Mountbatten Tiara and her Pearl and Diamond Tiara, though the bracelets were frequently worn . Lady Mountbatten died soon after her younger daughter’s wedding in 1960, and the necklace was inherited by Lady Pamela.

We were crisscrossing London in search of my mother’s jewels. She has not been robbed, it was just that she could not remember in which exact bank they had been left. We went to the first bank – when they offered us cappuccinos and custard creams I thought something was up, they were apologetic “So sorry Lady Pamela but we don’t seem be holding anything more than this box” we opened the box. It was a strange ornate headdress “when on earth do you wear THAT?” I asked, apparently it was for when you did not want to wear your tiara. Tiara’s are heavy, require hairdressers and lots of insurance. Once traveling from England to Sweden for a grand ball my mother wore her tiara under a huge hat – in order to make certain she did not loose it. Traditionally tiaras also require you to be married to wear them. I will never get to wear my mother’s Tiara because I remain a sinful unmarried woman, but the Tiara got sold a few years ago anyway so that is the end of that. To read more about my mother searching through bank bat caves click the link in my profile…and always more action on my Insta Story.

My Mama is turning 91 years old on Sunday. Join me tomorrow, Wednesday, for a pre-birthday chat. 💥 LIVE on Instagram at 10am EST- I can’t promise a tiara but I can promise quick wit and an extraordinary life.

While she was no longer the Queen’s Lady-in-Waiting, Lady Pamela and her husband, influential interior designer David Hicks, had a very busy social life in the 1960s and 1970s, and she had wore the Art Deco Diamond Necklace and the Mountbatten Tiara for a plethora of events and portraits, until the Necklace was sold at Auction for $71 000 in 1978. The current whereabouts are unknown but Lady Pamela recently talked about the Necklace in an Instagram Live with her daughter, India. 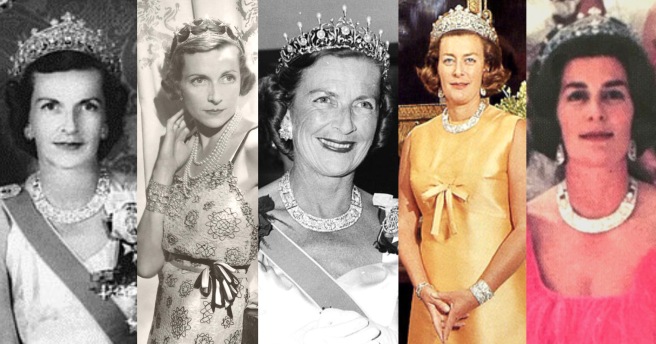