The Princess Royal celebrates her 70th Birthday tomorrow! The only daughter of the Queen and Duke of Edinburgh, who has been a working member of the Royal Family for over 50 Years, Princess Anne possesses an impressive collection of jewels, and to mark the occasion, we have featuring her Top 7 Jewels, ending with her Diamond Cluster Earrings.

Featuring a cluster of diamonds, from which a larger cluster of diamonds is suspended, Princess Anne’s Diamond Cluster Earrings, which can be worn with just the top cluster or int eh fuller version, have been in her jewellery box since the early 1970s, and are possibly gifts from the Queen and Duke of Edinburgh, or the Queen Mother. The Diamond Cluster Earrings were most worn prominently at Princess Anne’s Wedding to Captain Mark Phillips in 1973.

While the full version was often worn in the 1970s and 1980s, but in recent years, like her Grima Pearl Earrings, Princess Anne has worn only the smaller stud portion, mostly for evening events, though which are not worn too often these days. Lets hope we get to see more of these magnificent jewels for years to come. 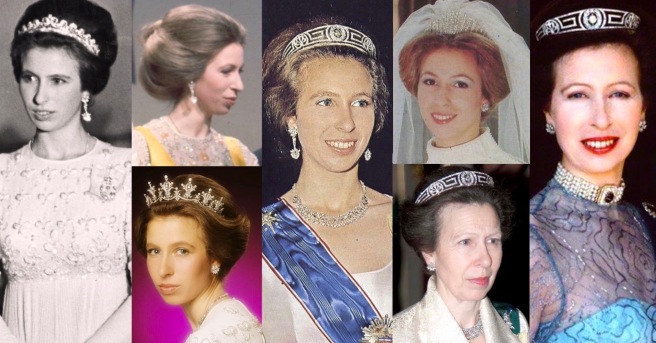