Princess Marina, Duchess of Kent born Princess of Greece, the Queen’s Aunt, passed away on this day in 1968, and to mark her Death Anniversary, we are taking a look at Princess Marina’s trademark Romanov Bow Brooch, which was worn to a plethora of important occasions.

In 1902, the Grand Duchess gave the Bow Brooch to her only daughter, Grand Duchess Elena, when she married Prince Nicholas of Greece and Denmark, who notably wore the piece in a portrait with her grand Diamond Kokoshnik Tiara.

In 1934, Princess Nicholas gave the Brooch as a wedding gift to her daughter, Princess Marina, when she married Prince George, Duke of Kent. The piece was exhibited along with the other wedding gifts before the Wedding. 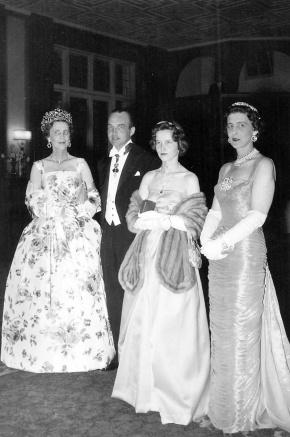 Princess Marina wore the historic Bow Brooch for a plethora of important occasions, even after being tragically widowed in 1942, including the 1937 Coronation of King George VI and the 1953 Coronation of Queen Elizabeth II as well as a variety of official portraits and royal events. She usually wore the piece with her Diamond Girandole Earrings and usually with her City of London Fringe Tiara.

Princess Marina was last pictured in her historic Bow Brooch at the State Opening of Parliament in October 1967, which was the last one she attended before her death the following year. Unlike the Girandole Earrings, it was not worn by the next Duchess of Kent, and was sold off sometime in the 1970s, eventually ending up in the collection of American philanthropist and collector, Mrs Charles Wrightsman. The Bow Brooch was auctioned at the sale of her jewels at Sotheby’s in 2012, fetching $842,500, many times over the original estimate, and is now in a private collection.